The same sexy, suspenseful surprises by Casey Clipper but in the paranormal world. 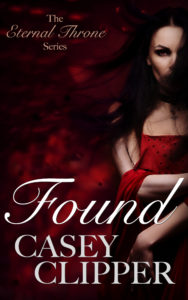 Kimberly O’Brian is unaware of her destiny. She’s a successful attorney living in a world she doesn’t belong.

John McMahon is the vampire king who’s spent years searching for his future queen. His throne and life remains empty without his soulmate by his side.

Until destiny finally comes through.

Kimberly’s meeting with John McMahon takes an unexpected turn, initiating a series of events she never expected to change her world she thought she knew.

Can Kimberly come to terms with her true identity? Can John convince Kimberly to take the vampire queen’s throne while keeping fate from taking her from him? What happens when a faction of vampires, who do not want the King to find his true love, discover the vampire queen has been found?

Do NOT follow this link or you will be banned from the site!